On Halloween Eve I went on the Halloween Fantasy Trail at Wenzel Farm in Oregon City, OR and it was really spooky. 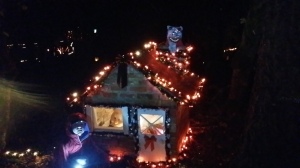 The first thing we went through was an arch. In the arch there was a witch and an annoying skeleton head. It copied everything you said.

Then you walk inside a house with a guy in a cage and picture frames on the wall. The pictures change as you walk by. After, you go into the pirate’s maze where there are a lot of pirates. At the end of the pirate’s maze there was a suspension bridge; it was really bouncy. 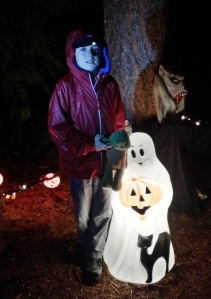 Then you go to a stopping point where you hear Halloween songs. Next you go to a jail where you go through a tunnel with people in cages in the prison. When you get out there is a crooked house that leads to Porky the Pig and the Three Bears having a good Halloween.

Last but not least, we went into a castle with flashing lights and monsters that try to scare you. Then you exit and get doughnuts.

I would recommend this place. It’s not that scary and it’s for all ages. I would probably do it again.

Hi, my name is Lucas and I am traveling the United States for eight months with my family in a 39 foot 5th wheel. Franklin, my turtle, is accompanying me. My blog is about the places Franklin and I visit around the country. On this trip I am looking forward to zoos, aquariums, new foods, the Grand Canyon and other national parks. My hobbies are reading, doing and watching circus tricks, cooking, Minecraft and exploring.

Welcome to The Traveling Turtle Blog! If you're new here, please subscribe. Thanks for visiting and don't forget to share our site with others!